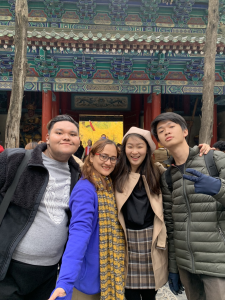 Aileen Tanjung was honoured to represent Universitas Surabaya as a participant in the 4th Student English Speech Competition on 3rd until 6th of November, 2019 at Sias University, Zhengzhou, China. I was selected to join the competition with the other 2 participants from Universitas Surabaya which are Joshua Edbert and Daud Hernoud. The three of us were accompanied by Mrs. Devi Rachmasari. We left Surabaya in November, 2nd 2019. It took around 12 hours for us to get to China by China Southern Airlines.

We arrived at Sias University in November 3rd. The first thing that we did was checking in at Sias Hotel. At 6 in the evening, all of the participants were invited to the Welcome Dinner hosted by Sias University. During dinner, we were given the chance to get to know each other. There were 23 participants from 5 different countries which are Philippines, India, Bangladesh, China, and Indonesia. On the second day, the first round of the competition started. Luckily, I and Joshua Edbert got into the top fifteen. The third day was the semifinal. Unfortunately, I and Joshua Edbert did not make it to the finale. In the evening, we were all invited to watch International Talent Show held by all the international students at Sias University. After that, I spent my evening strolling around the campus and bought some stuffs. The third day was the most exciting day. They took us to Shaolin Temple to get some beautiful pictures and learned about some of the China’s history. Not to mention, we also watched Shaolin Kungfu Show which was mesmerizing. On thursday, we had to leave the hotel on 5 in the morning and headed to the airport. Although I did not win the competition, this whole competition journey was one of the best things that I have experienced. It was nice meeting new people from different countries. We were singing together before the competition in the waiting area. We shared lots of stories during meal at the Peter Hall. Last but not least, I learned lot of things about their habits and cultures back in their countries.